For decades I suppressed and hid my emotions, operating on the belief that is what a real man should do – especially with expressions of fear, sadness and need for belonging.  So, being an even-keeled, perpetually calm and staunchly independent guy should have felt good. The suppression became more and more extreme over time.  To give you an idea of how detached I became, a colleague once said to me, “I have a question for you as someone who is emotionally vacant.”  That should have been a wake up call, but the emotionally vacant march forward continued for years.  My plan was to remain on top of the growing pile of suppressed emotion.  But the plan was a complete failure and eventually it became harder and harder to keep marching.  My existence became a miserable one, suffocating under the pile.

It seems obvious now, but for an excruciatingly long time I was blind to the fact open expression is a necessary part of really being alive. Getting to a place of expressing more often and doing so without worry has not been easy, and there is more work ahead.  Talking about my feelings, especially with another man, is linked with fears of judgment and of being shamed for softness and weakness. This poem is about my ongoing learning process to sever those links and continue growing.

Neither judgment nor shame has ever resulted from my moments of open expression. What has resulted is a happier and stronger man. While typing this introduction, I feel the pain and harm from my years of suppression and there are tears in my eyes. That does not make me less of a man; it makes me completely human. 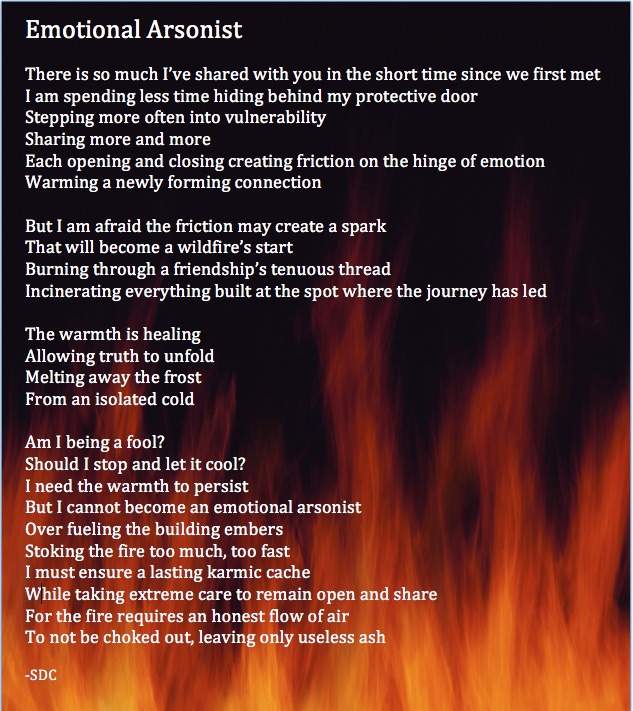 There was a period with my writing where I experimented with the placement of words on the page as much as the meaning of the words chosen.  Part of the overall mental and emotional release was to see the shape of the finished poem.  “Pause” is an example from that time period.

The number of words is few, leaving space for contemplation – like a chant or prayer.  Nearly 20 years passed from the time this was written to when I saw it again.  The effect was exactly the same as when it was new.  My whole being slowed down, and everything did pause.  A beautiful pause.  An appreciative pause.  A healing pause.

Music of all sorts occupies an important place in my life.  My workdays are filled with everything from Beethoven to Beck; or John Pizzarelli to Portugal. The Man.  Sometimes the flow of my writing is triggered by hearing a song.   “Pajama Waltz” happened as a cascade.  First, I heard a song from Meaghan Smith called “I Know”.  The feeling of that song made me think of “We Just Couldn’t Say Goodbye” from Diana Krall.  After listening to both songs, the flow started.  I felt like dancing……..and writing.  I encourage you check out both songs – and maybe rearrange the furniture.

This poem came about as a series of contrasts.  It was written in a period of time where my routine was all out of whack, yet the drudgery of everyday life was still in place.  I felt detached from the world, but at the same time, my surroundings were in control.

Photo by Azrul Aziz on Unsplash

During the drive to work one morning, everything around me felt like it was moving slower than normal.  The cars merging into traffic seemed to be moving in an odd fluid-like manner – a bizarre viscous flow.  I was moving at normal speed, but everything around me was not.  A thought went through my head that I was driving in a zombie universe.  That idea remained for a couple of days, becoming a driving force of this poem, as the contrasts continued.

I was writing a great deal at the time while also struggling to decide what to do with all the output.  So many ideas were coming that at some points I had four or five poems being composed at once.  Combining with the increase in output was a recurring thought that all of the writing needed to be destroyed.

Soon after writing this, the normal routine of my life returned and the chaos in my head began to calm.  Obviously, I chose not to destroy all of my writing since you are reading this.  My editor thinks this poem is rather weird, but I hope it stimulates your brain rather than making you want to eat some. 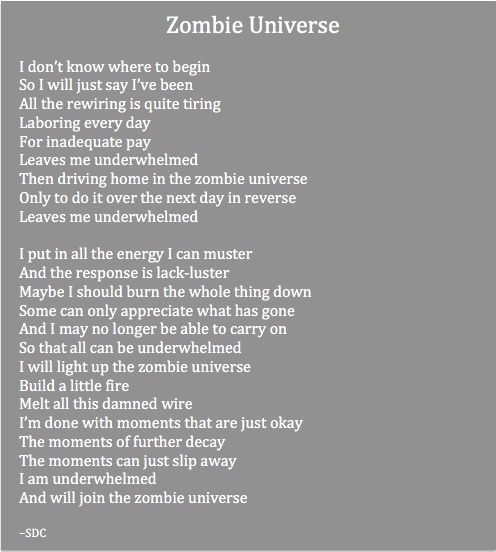 Shawn is a pharmacist living in Indianapolis Indiana. He is a product of the love and compassion surrounding him. Learn more by visiting the About page on the menu.